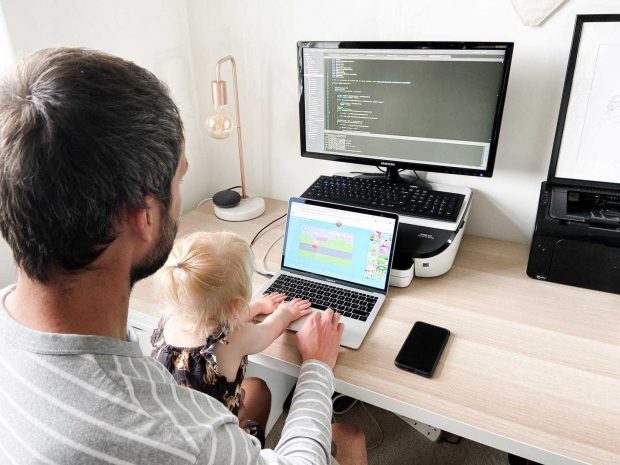 I’ve worked at the DfE since 2015, in policy and delivery roles. But the thought of writing a submission filled me with dread, and doing commissions was not something I particularly enjoyed. Although I enjoyed working in these teams, I wanted a career change. I wanted to code. In this post I’ll explain how a coding bootcamp helped me switch careers.

For some people the idea of coding fills them with dread. But I’d always loved using any software that was logic driven.

I’d dabbled with learning to code once or twice before. Initially, I'd tried a couple of free resources such as Code academy, but after grasping the basics I did not know where to go next.

I’d looked into joining a group of trainee-developers in London for 3 months, but my plans took a slight detour. My baby daughter, Kitty, was due 4 weeks before the course began. I had no option but to be at home for her birth.

At this point I thought I’d missed my chance - destined for a life of reports, commissions and governance.

Following paternity leave, I started a new role in DfE  but again, there were commissions, business cases and correspondence to draft. Writing has never been one of my strengths so I struggled to enjoy my job.

I kept thinking, 'What would have happened if I’d stuck at it?’ I spoke with my line manager about coding and she was incredibly supportive.

I set myself a goal - within 6 months I would have a job broadly related to IT or programming. It was vague, but it was a start.

I dedicated time each week to researching my options. I decided to learn Javascript using freecodecamp.org. I also had a go at CodeWars and tried to put what I'd learnt on freecodecamp into practice.

Then the opportunity of becoming an apprentice developer in DfE Digital arose. This apprenticeship meant taking part in the Northcoders bootcamp.

This is an intensive training programme based in Manchester that gives people the practical knowledge to become a software, web, or mobile app developer.

While waiting to start the course, I continued to use freecodecamp in my spare time. Northcoders gave me an entry test and pre-course Katas to complete. (These are exercises in programming that can help programmers to hone their skills through practice and repetition.)

What can people learn at code camp?

In a nutshell, you learn how to become a full stack developer. Learning back-end (code that goes on behind the scenes, i.e. server-side) and front-end (code that takes place on your computer), using NodeJS in 12 weeks.

In the first 3 weeks you learn about recursion, callbacks, object orientated programming and continuously get to grips with testing.

On the back-end you have the chance to create databases using PostgreSQL, set up a server using ExpressJS and communicate with it using RESTful APIs. This sets you up for a week long review during which you create a server and database for a web application you will host.

On the front-end block you learn more about HTML, CSS and get to use the ReactJS framework to, again in a week long review, create the user interface for your web application.

For the final 3 week project you almost get to do what you like. In the team I worked with we created a mobile app for a game of hide and seek using Flutter. We used a lot of new tech having the chance to try Dart, socket.io, Google Maps and MongoDB.

How I overcame my challenges

The first 3 weeks were really difficult. I found a couple of quite fundamental things hard to grasp. These were 'recursions' and 'callbacks'. This knocked my confidence.

The pace and intensity of the course was surprising but I wasn’t alone. Luckily Northcoders have a system where you can retake a ‘block’ of learning.

After completing the initial stage for the second time I was more confident. I’d fully grasped the fundamentals and I was ready to move on.

Having a 14 month old baby who wasn’t sleeping through the night wasn’t easy. A full day’s coding followed by bathing and putting a toddler to bed was hard.

It got a bit easier in the ninth week when we all went into lockdown. I could do the course remotely and save time by not having to commute.

Remote learning had its own challenges but Northcoders were brilliant and worked hard to keep everyone on-track.

Would you recommend a coding bootcamp?

Yes, but don’t expect it to be easy. It was mentally exhausting - you live, eat, drink, breath, and dream code.

You’ll solve katas in your sleep and create more problems with your code, without even coding. The amount you learn can be overwhelming but it does get easier as you move through the course.

Obviously I’ve still got plenty more to learn but by doing Northcoder’s bootcamp I’ve taken a big step towards becoming a developer here in DfE Digital and that feels great.

If you have any questions about the bootcamp or just fancy a chat about coding, please comment below or get in touch.